Cycling from Nice to Paris in France – ESSKA

On the Cote d'Azur, Rhone, Loire and Seine to Paris with the Champs-Élysées

Cycling from Nice to Paris in France on the Cote d’Azur, through the French Maritime Alps and along the great French rivers Rhone, Loire and Seine to Paris on the Champs-Elysees.

On this racing bike tour we ride past beautiful beaches along the coast of the Cote d’Azur, through the impressive French Maritime Alps along gorges and vertical rock faces and over countless curves and serpentines with mostly pleasant gradients. Later it goes along the great French rivers Rhone, Loire and Seine to the French capital Paris on the Champs-Elysees. Similar to the Tour de France, the Arc de Triomphe is our final destination.

Minimum number of participants: 18 people. in the case of a cancellation period at least 30 days before the start of the journey. (For further information see Info & Service). Cancellation scale: A
German citizens need an identity card. Other entry and visa regulations may apply to citizens from other countries.

Booking conditions: You can make your reservation via our booking system (in German only) or via the booking form. After the receipt of your booking you will receive a confirmation of travel by eMail. After booking, a deposit of 20% of the tour price will be charged. The balance is payable 30 days before departure.

With the travel confirmation, you will receive the Internet link to our secure credit card page. You can easily pay with your credit card.

Before you fill out the registration form, make a download and save the PDF to your PC. Only then fill out the document and save it on your PC. You can then send the completed PDF by email to us at info@launer-reisen.de.
If you have any questions or if you need any further information email us or please call us on +49 7964 92 1000.

Biking at the Cote d’Azur among the Sea-Alps and along the french rivers Rhone, Loire and Seine to Paris with its Champs Elysees. This tour leads us along gorgeous beaches of Cote d’Azur, among the impressive French Alps with gorges and cliffs and uncountable serpentines but almost always tolerable uphill grades. A few days later we ride along the big rivers like Rhone, Loire and Seine to the French capitol city Paris and its Champs Elysees. According to the TOUR DE FRANCE our destination is the Arc de Triomphe.

We ask participants who want to use the service to let us know.

If participants want to arrive 1 day earlier, the participants must book and pay for this night themselves at the hotel.

Is not included in the price.

Guests who drive to the hotel independently, for example by taxi, have to pay the costs themselves

Individual arriving and first easy ride from Cannes to Antibes and back submontane the Sea-Alps to our hotel. From our hotel the track leads us to the outskirts of the historical part of Cannes where we can have a look at the castle in which the Museum de la Castro is housed. Then we take the way in eastern direction parallel riding the beach 2 km on the Boulevard de Croissette. Beside several luxury shops, exclusive hotels and 3 casinos there is also the Palais of Film Festival. This festival takes place every year in May. Biking along many beautiful coasts we arrive at Antibes. We surround the Kap Antibes and take a short break at the Picasso-Museum and the Cathedral Notre Dame de la Plata. After the break we take our way in northern direction, crossing the water mouth of La Bragne and go further to the west. Passing Biot we take our way in southwestern direction submontane back to the hotel. Now we have a first impression how the tracks will be the coming 3 days.

2. Day: Sea-Alps to the west, 100 km, 1750 alt. diff.
We start from the hotel along western direction along the coast. After 8 km easy biking we go up-country and have to overcome 300 alt. diff. until 21 km. We will be rewarded with a rapid down-hill-tour and we’ll stop at the barrier lake Lac de Saint Cassien at Kilometer 25. It is a touristic place and a paradise for fishermen. From there we go in northern direction to the Sea-Alps. At kilometer 43 we cross the river Saigne and ride to the city Grasse which is known well for Perfums (49.000 residents). In Grasse there are 30 factories for perfume-production.  Contrary to the past the raw material is imported. In the factories the material will be mixed and mastered an exported into the whole world. At Grasse we will have let behind the highest point of this track which is 782 alt. diff a kilometer 60. We bike submontane to Roquefort-le-Pins and Valbonne back to the hotel and call it a day.

3. Day: Sea-Alps to the North,   94 km, 1800 alt. diff.
Today we start from the hotel in northeastern direction parallel the coast to Cagnes-sur-Mer (51.000 residents) along the water mouth of river La Cagne letting Cap Antibes at the right side. The district Le Haut de Cagne is placed on a hilltop where we find the Castle Grimaldi which we pass in eastern direction. The Castle was built approximately 1300 ordered by the French admiral Rainer Grimaldi, an ancestor of the Princes Grimaldi today. Since 1937 it’s property of the City and is used as a museum. After we have climbed 180 meter alt. diff. at kilometer 27 we start at city Vence with a long up-hill-ride to the top of Col de Vence which is 963 m high with its spectacular landscapes and gorges. There we will have finished 37 kilometer. The way leads us onto a plateau above the river La Cagne in western direction through the Sea-Alps. Then we go to the south at kilometer 54. We arrive at Valbonne with its monastery from anno 1199 at kilometer 77. Ripply but down-hill we ride back home to the hotel.

4. Day: The Way to Paris, 111 km, 1540 alt. diff.
Today we leave Cannes and the Cote d' Azur and cycle west to get closer to our destination Paris. First we drive a good distance along the coast and enjoy the beautiful view over the Golfe de la Napoule. After about 9 kilometers we finally leave the Cote d'Azur and climb the first climb of the day to about 370 meters before a nice descent almost back to sea level. We pass Frijus, a city that Emperor Augustus gave importance to in Roman times by founding a colony here.
Then the profile is slightly wavy up to about 50 km, until we then have to cope with a few meters of altitude again. But these are mostly comfortable to drive. In the afternoon we reach the destination of today's cycling stage, the town of Varages, which is known for its ceramics production. Here we load the bikes and let our bus driver drive us to the hotel in Orange.

5. Day: River Rhone, 74 km, 270 alt. diff.
After having had a so called hard time during the last couple of days within the Sea-Alps the coming stages will be easier. To go to Paris will make the Bus required which shortens our time by bike. After a very early breakfast we start by bus in northern direction. Past midday we start biking in the City Ponzin at the River Rhone. The river is approximately 800 km long and the most watery river in France. The diff. alt. is unremarkable. Alongside the Rhone there are many Castles and Palaces or ruins of those which let one assume how wild and colorful the history might have been. Passing little villages and small cities we arrive at Tournon-sur-Rhone at kilometer 40. A short visit of the historical city-center with its Manor Houses and the Castle Tournon and least the collegiate church St. Julien is advisable.  From there we ride along several Castles und Manor Houses across the beautiful Rhone-Valley and we’ll reach our hotel in Chanas at early evening.

6. Day: Loire, 73 km, 290 alt. diff.
Also today we need the bus to go to our starting-point. After an early breakfast we take off. In the afternoon we start at Saint-Leger-des-Vignes. The tour today leads us through the Valley of the river Loire. The Loire is 1.004 km long and therefore the longest river in France. Along the Loire there are many Castles and ruins which remind us of the changing history. Shortly after the start, at Denize, we pass the ruins of the Castle of the Earls of Nevers and an abbey. The distance profile today is easy to manage so we can enjoy the beautiful landscape along the river. In Nevers we’ll take a break at kilometer 38. The historical City Center with its small alleyways and its domestic architecture from the 14th until 17th Century, a Dukes-Palace, a Triumphal Arch, the Council House and the relics of the fortification show the visitor a living history. Our ride takes us through the beautiful Loire-Valley and we reach our bus at the end of the day at Charité-sur-Loire. There we can have a glimpse at the fortification from the 11th century and the historical bridge over the River Loire. The bus takes us to our hotel in Ury, approximately 60 km away from Paris.

7. Day: Finish-Line Paris, 76 km, 310 alt. diff.
Our last stage of our scenically and culturally outstanding tour which we will remember a long time leads us along the River Seine to Paris to the Champs Elysees. The French Capitol has 2.2 million residents. The whole district around Paris has about 12.5 million residents. Remarkable places of interest are the Tour Eiffel, The Louvre and the Inner District planned by Baron Haussmann between 1853 and 1870 which we pass on our way through Paris. Enjoy all these architectural specialities! Starting from the hotel in northern direction we come alongside the Castle Fleury-en-Biere built in the 16th century for the Secretary of Finances under the rule of Henry the 2nd, Cosme Clausse. At kilometer 26 we arrive to Saint-Fargeau-Pouthierry at the River Seine. Its Papermill is nowadays an industrial monument. The River Seine is 775 km long and therefore one of the longest rivers in France. We follow the river until we reach Paris which is easy to ride. Through the Seine-Valley we arrive at kilometer 43 the small town Ris-Orangis with its 4 Castles. Than we ride along the outskirts of Paris until we reach the famous Champs Elysees at kilometer 75. The very last 1 kilometer is dedicated to the Tour de France and its ultimate finish – The Arc de Triomphe!! A great finish of a great tour.

The following Hotels are intended for the bike-trip:
20.04.‐23.04.22: 3 x Halfbord Cannes
**** Hotel Golden Tulip Paris. A nice 4‐star hotel with a pretty garden, swimming pool and the flair of southern France. The hotel has no restaurant. So we have to take a 5-minutes-walk to a Restaurant.

Before you fill out the registration form, make a download and save the PDF to your PC. Only then fill out the document and save it on your PC. You can then send the completed PDF by email to us at info@launer-reisen.de.
If you have any questions or if you need any further information email us or please call us on +49 7964 92 1000. 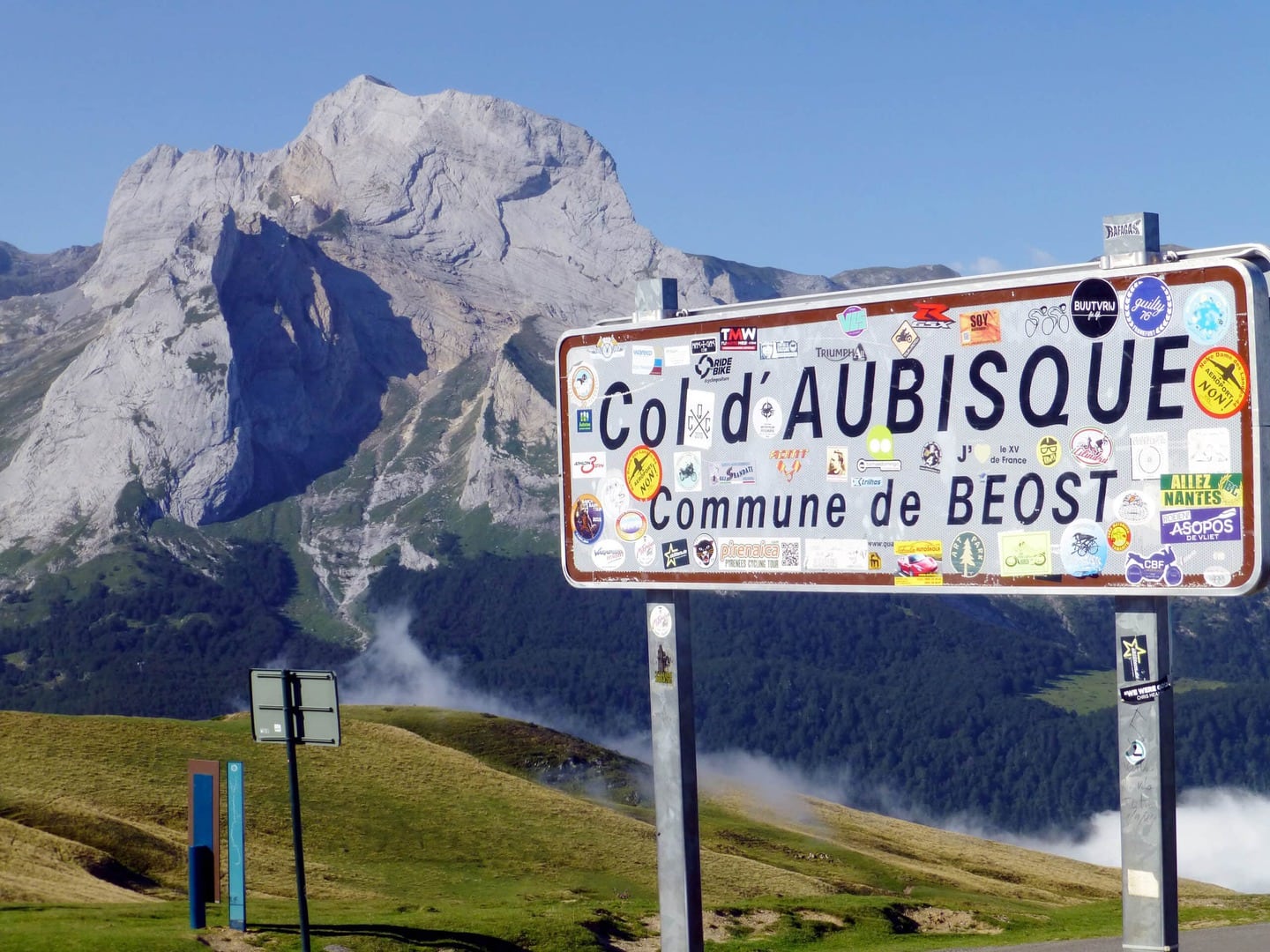 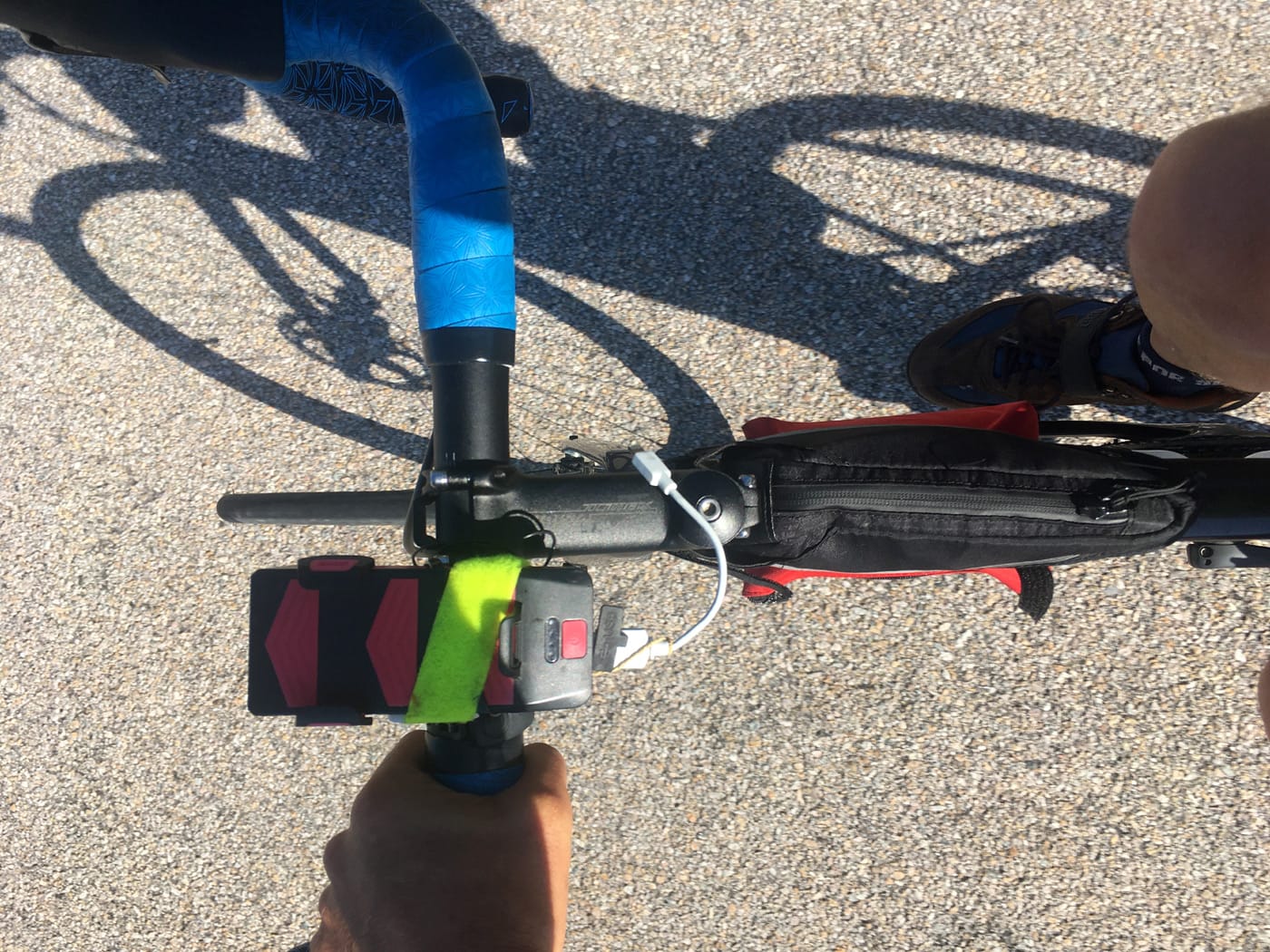 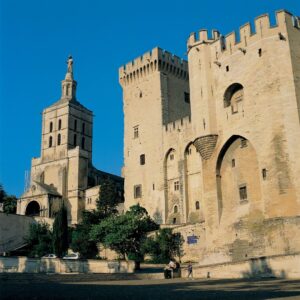 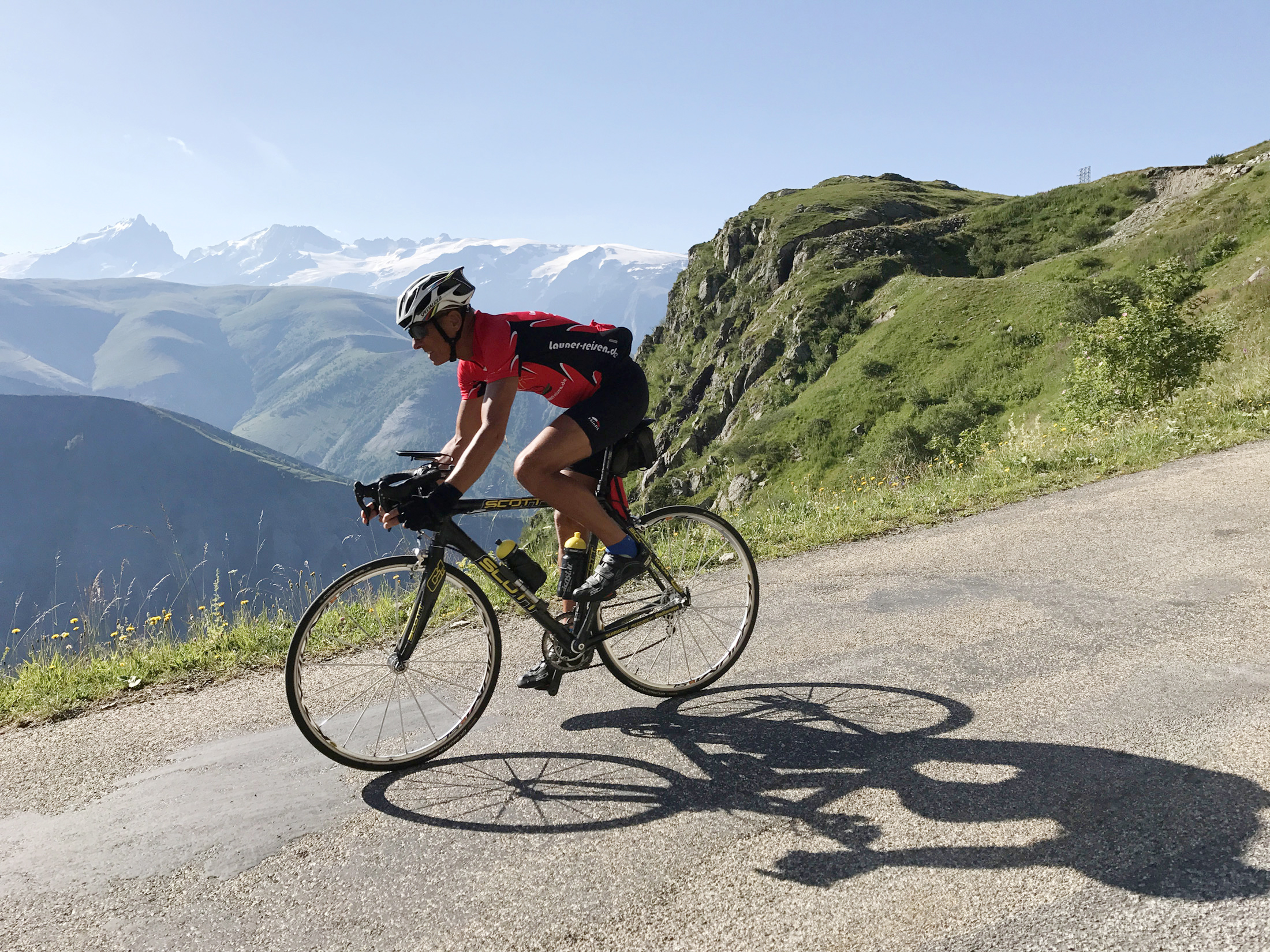 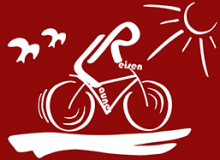 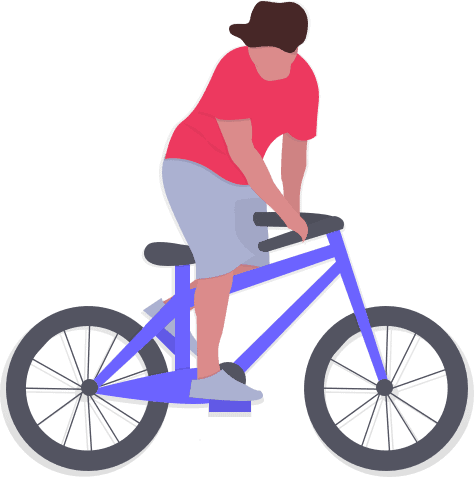